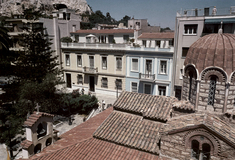 The Institute is recognised by the Greek Ministry of Culture as an archaeological school, allowing it to apply for permits on behalf of Danish archaeologists wishing to undertake field projects in Greece.

The Danish Institute was founded on 2 April 1992 and is centrally located in Plaka on the eastern slope of the Acropolis, in a beautiful neoclassical building dating from the beginning of the 20th century. The building was inaugurated on the anniversaries of the Institute’s foundation and the birth of Hans Christian Andersen, on 2 April 1993, and was a gift from the Carlsberg Foundation.

Two years later the Institute expanded, with the acquisition of the neighbouring building at Herefondos 12, also donated by the Carlsberg Foundation. This property was renovated as a guesthouse with two double rooms and a suite. October 2000 saw the inauguration of a new building, connected to the two older properties, and housing an auditorium and offices. The building was a gift from the Velux Foundation. The institute also has a guesthouse in Maggina # 1, which is a 3-minute walk from Neos Kosmos Metro Station. The house is donated by A.P. Møller and Hustru Chastine Mc-Kinney Møller Foundation for general purpose, and the VELUX FUND and Ny Carlsberg Foundation have supported the renovation and furnishing. The guest house in Maggina contains a large apartment with three residency rooms, as well as a small independent studio apartment, and it has a large roof terrace with access from both apartments.

Nordic Library was inaugurated in 1995. The Nordic Library is a research library, focusing in particular on archaeology and the study of ancient culture. The library is operated jointly by the Nordic country institutes in Athens – those of Denmark, Finland, Norway and Sweden.

The Board of the Danish Institute at Athens consists of nine members. Applications to stay at the Institute are decided by the Board on the recommendation of the Director. For more information on accommodation (in Danish only), click here

The daily management and administration of the Institute is handled by the Director, who is assisted by the Assistant Director.

The Institute organises a programme of open cultural events, including lectures in an international language, concerts and exhibitions. Each programme lasts for six months, with one commencing in the spring and autumn of every year.

The Institute is closely connected to Danish educational Institutions. It hosts conferences, symposia, courses for PhD students, and other courses. It receives visits from excursion groups and arranges for their access to museums and archaeological sites.