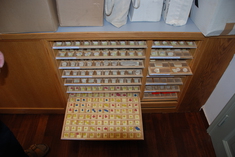 The collection is a result of Dr Hallager’s research on Minoan and Mycenaean sealing systems since the mid 1980s. Most of the impressions are from seals contained in the Heraklion Museum, the Aghios Nikolaos Museum (Petras) and the Chania Museum, while they also include impressions from the Rethymnon Museum, the National Museum, Athens, the archaeological museum in Thebes, the Pigorini Museum in Rome and the Ashmolean Museum in Oxford. Two series of impressions are complete: the hieroglyphic archive at Petras and the flat-based nodules from Chania, while the remaining impressions offer a representative selection of sealings from all major sites where they have been found.

The collection, which has been stored in trays according to the system indicated above and subdivided according to sites, is available for studies at the Institute. Together with the collection you will find all relevant publications (except for the CMS volumes) and a database in Excel. A PDF version of the database can be downloaded here.

The collection consists of 724 impressions:

Impressions and casts of seals and seal impressions: 60