Zea Harbour Project (ZHP) – the combined land and underwater archaeological investigation of the ancient harbours of Zea and Mounichia in the Piraeus – was launched in 2002. ZHP’s mission is to excavate and conduct research in the ancient naval bases, primarily the ship sheds that housed Athens’ fleet of triremes, and the harbour fortifications. The fleet was the backbone of the Athenian Democracy in the 5th and 4th centuries BC.

The ZHP operates under the auspices of the Danish Institute at Athens and is directed by Dr Bjørn Lovén, Associate Fellow at the Maritime Archaeology Programme, University of Southern Denmark. The project is supervised by the Ephorate of Underwater Antiquities (2002–2012) and the 26th Ephorate of Prehistoric and Classical Antiquities (2002–2009). The Carlsberg Foundation has financed the ZHP since 2004.

ZHP on facebook
Dr. Bjørn Lovén at the Carlsberg Conference in January 2016 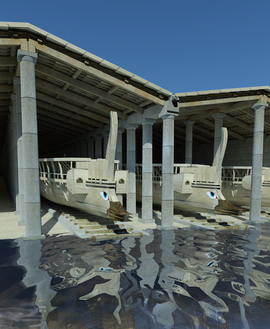 Reconstruction of the shipsheds at Zea Harbour