In 2010 the Danish Institute at Athens joined the long-term Greek-Swedish excavations at Kastelli, Chania. Director of the excavation is Dr Yannis Tzedakis (former General Director of Antiquities, Ministry of Culture) with Dr Ann-Louise Schallin (The Swedish Institute) and Dr Erik Hallager (The Danish Institute) as co-directors. The older excavations of Minoan Kydonia revealed that the modern town of Chania has a history of 5000 years and showed that the site was continuously inhabited except for ca. 400 years from the end of the Bronze Age (ca. 1150) till the end of the Geometric period (ca. 725) when people returned to the site and re-inhabited the Minoan ruins.
The most important discoveries were those from the end of the Bronze Age, the Late Minoan period (ca. 1500-1150 BC) where – uniquely for Crete – seven subsequent settlements could be documented. One of the most important discoveries from those settlements was the finds in 1990 of Linear B tablets, in Crete otherwise only discovered at the Palace at Knossos. The tablets were found in the final destruction layer of a large important building of the LM IIIA:2/IIIB:1 period (1350-1250 BC). The tablets found proved that Dionysos was considered a god as early as the Bronze Age, and the way they were produced was exactly the same as that of the Knossos tablets, the date of which is still uncertain.

The Linear B tablets

The main purpose of the renewed GSDE is to explore, as fully as the modern habitation permits, the building where the Linear B tablets were found. The project hopes to find more Linear B tablets, but it is equally significant for the understanding, within a broader pan-Minoan perspective, of the function of one of the most important buildings yet discovered in Western Crete. The five-year project includes three excavation seasons with ongoing studies, and two seasons for further studies and publication.

The first excavation season in 2010 was conducted by Dr Erik Hallager and Dr Maria Andreadaki-Vlazaki. It produced impressive results in the form of architecture, pottery – including imported Italian Handmade Burnished Ware, and some important small finds – including a fragment of a Linear A tablet, seven seal stones, a unique amulet in rock crystal, a bronze knife, lumps of Egyptian blue colour pigment, and a great many animal bones, some possibly from offerings.

The sponsors for the first season were The Institute for Aegean Prehistory and Gunvor & Josef Anérs Stiftelse.

Short report on the project 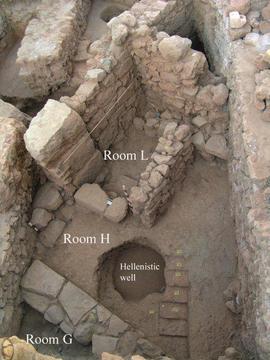